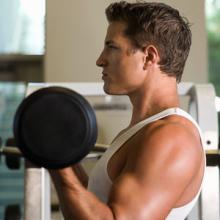 As a follow up to our How To Get Bigger Arms article, it’s time to focus on something many people outright ignore or do not understand when it comes to arm training. In fact, if you’re focused on achieving any type of aesthetics, it is an essential addition to your workout knowledge and training regimen. That something is the effect of grip on your arm training. Often, people grab a barbell to work their biceps and believe the road ends there. The same can be said for triceps, perform the motion and call it a day. However, when you want to look proportional it is imperative that your weak points are prioritized to give you the physique you desire over time. Otherwise, one muscle group may look bigger than another and without any sort of willful intervention, continue to outpace the others. This sort of imbalance is also very applicable specifically to arm training, and it’s time to make sure your arm looks the best it can by understanding how you can affect the growth of any of the particular arm heads through grip. 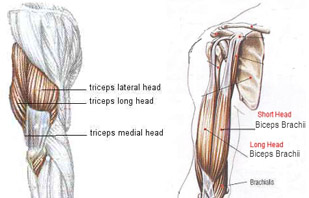 Before we hit the ground running, it’s important to understand some basic anatomy. The bicep has two heads – the inner and outer heads. The inner head is the short head, and the outer head is the long head. That’s why it’s called a bicep (“bi” = two). There is also a small muscle called the brachialis to the side towards your elbow which we’ll touch up on a bit later. Similarly, a tricep has three heads – the lateral, medial, and long heads. Again, that’s why it’s called a tricep (“tri” = three). The bicep heads are self explanatory, there’s a head on the inside of your bicep (short head) and one on the outside (long head). The triceps can’t be identified by name, so the best way to remember which head is which is to differentiate between the lateral and long heads. The lateral head is the head closest to the outside of your arm (if someone was looking at you from the side), while the long head is the head closest to the inside of your arm (hugging your lats/chest). Interestingly, the lateral head is considered the inside head while the long head is considered the outside head (this is so because the long head wraps around the outside of your tricep from the inside). From there, the medial is the small head in between the two in the middle.

Now, often an individual notices that their biceps don’t look very “wide” standing front side or one of their tricep heads is lagging behind. Punishing your biceps or triceps in these situations will help, but it will not maximize the chance of achieving a size balance between the different heads. Why? Well, your current tricep and bicep work couldn’t do it, what will change now? One head grows better than another for you, so it is essential you switch to prioritizing the ones that do not. This is where hand grip comes in, as it can make a big difference in development. We’ve already covered how different tricep exercises help develop a particular head, but here we’re focused specifically on how grip can aid this goal even further.

1. Palms Down (downward motion) – the most common exercise with a downward motion for the triceps is tricep pushdowns. There are many variations of this exercise, especially when you factor in the different handles you can use to perform it (v-bar, rope, one-arm, bar). Most often the exercise is associated with prioritizing the lateral head. However, that’s not always the case, it depends on the grip. A regular palms down grip for tricep pushdowns (obviously, to have a proper palms down grip on this exercise you’ll need to use the bar or one-arm) actually prioritizes the long head if done properly (using the mind-muscle connection). However..

2. Thumbs Pointing Up (downward motion) – if you’re doing tricep pushdowns or any other exercise with a downward movement, simply using a rope instead of a bar (therefore, forcing your thumbs to point up) will switch priority to the lateral head. This is also the case with the v-bar, which naturally places you in a thumbs up position. Of course, suddenly the lateral head isn’t doing 90% of the work the long head was just doing with the bar, but there is a shift in focus that takes work away from the long lead and places more emphasis on the lateral head even though both are still getting worked.

3. Palms Up (downward motion) – if your hands are reversed so that your palms are facing up, sticking with tricep pushdowns as the example, you’re going to prioritize the medial head. Again though, any tricep exercise is still a tricep exercise, so each head is getting some work. The goal is to use grip to change how much of the work any one head is actually doing in relation to the others.

*Anytime you go over your head for triceps exercises, grip doesn’t make as much of a difference because your long head is so dominant that grip alterations play a negligible role. However, as you can see, for a large portion of your tricep movements (those that are not over your head), grip changes can allow you to shift focus even within particular exercises. This remains true for exercises that you may do at a different angle (instead of straight downwards). Switch your grip, and the same rules apply for any tricep exercises that are not over your head.

Biceps: there isn’t as much potential for variation between bicep exercises that there is for the triceps, but specifically for barbell exercises:

Shoulder grip refers to a grip on the barbell that is parallel to your shoulders. Where your shoulders are, that’s where you grab the barbell. Now, this may seem a little weird. Wouldn’t the inner head be worked with an inner grip, and vice versa for the outer head? No. When prioritizing bicep heads, the grip you should use is opposite to the head you are working. Therefore, if you want to bring out your outer head to be thicker standing front side, work your biceps with a narrow grip.

*The brachialis mentioned earlier is worked by using a hammer grip on bicep exercises. A hammer grip is also known as the neutral grip, because your palms aren’t facing up or down but are neutral (the way they are when you are standing with your hands hanging at your sides). Good luck!

P.S. – to increase the work your bicep or tricep handles by taking away forearm involvement (especially during bicep training), try a thumbless grip. Put your thumb with the rest of your fingers under the bar, you’ll feel the difference fast. It can also be used to prioritize particular heads. For example, using a thumbless grip when performing tricep pushdowns with a bar shifts priority to the lateral head depending on the angel with which you perform the exercise. The best thing to do is to play around and see what works. Remember, these are micro-changes to your arm workout, so they are not meant to make your arms blow up in size. Use this to help you even out any inconsistencies to the extent it is possible. For information on how a thumbless grip can help your lats grow, visit our Lat Pulldown: Maximizing Lat Width and Size article.