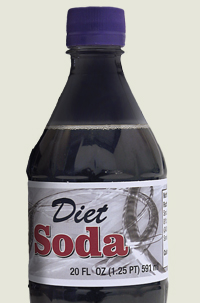 Is diet soda bad for you? That’s the reigning question in regards to the topic of diet soda, ever since its initial release. The topic has garnered a ton of attention, particularly due to the extreme positions taken on either side of the debate. Some hold diet soda in high regard, claiming it’s a heaven-sent alternative to regular soda that can help people curb their calories while satisfying their carbonated desires. Others believe that diet soda is bad for you, and is nothing more than a nutrition-less substitute that can have long-term implications if a staple in your diet. It’s time to shift through this fervent chaos and find the realities, by looking at diet soda from the perspective of a fitness-oriented individual.

The biggest component of those vouching for diet soda is the fact that it is indeed a calorie-free drink. On that basis alone, it can help many people avoid taking in extra calories throughout the day, possibly halting weight gain or even allowing for weight loss (depending on the rest of your diet, of course). Those who believe diet soda is bad for you have not taken this calorie-free advertisement as the truth, however. There is a widely popular rumor that diet soda isn’t actually calorie-free, and that the soda companies pay the Federal Drug Administration money to allow them to continue printing a bogus nutritional label. Fortunately, even though we’re highly aware as consumers of the fact that these companies aren’t angels, in regards to this particular rumor we can stick to being content with the fact it really is nothing more than a rumor. I’d imagine those who believe diet soda is bad for you would have come up with a better logical reason behind this secret pay-off that’s supposedly happening. I mean, let’s be real here. Imagine how the courts would be on fire if some diabetics were to enjoy diet soda on a regular basis and intake all that sugar that’s supposedly there. Not happening.

Diet soda is indeed calorie-free, and that is a huge plus for those who truly want to start getting away from regular soda and its sugars. Nonetheless, emerging studies point to quite a dilemma. Since diet soda is an artificial sweetener, there exists the possibility that it may cause bigger calorie issues in the future. To expand on that, imagine your body being tricked into believing that it’s about to ingest some sweet sugars, when in reality you feed it diet soda instead. Over time, research has indicated that there is a strong chance that this may raise sweet cravings. What good is cutting some calories initially, when there’s a high chance you won’t be able to quell the increased desire for sweet foods? 100+ calories now does not sound like the greatest trade-off with 400 calories later (example amounts, of course). This is particularly worrying to those who opt for diet soda as opposed to regular soda because they already have trouble completely removing such cravings, as witnessed by the switch to diet instead of water.

We know that in order to achieve your fitness goals, you must feed your body the nutrients it requires for it to do what you want it to. Diet soda does not provide any nutritional value whatsoever, and as shown above, actually tricks your body. At least regular soda gives you some energy in the form of simple carbohydrates (sugars). Since soda is clearly not a viable alternative we’re attempting to discuss here, the best thing to do would be to switch to something that actually has benefits. Green Tea benefits are plenty. Not only does it increase metabolism so you can burn more calories throughout the day (small, but helpful over time), but it also is antioxidant rich for anti-aging, anti-cancer, basically anti-anything bad. If you’re not interested in that alternative, stick to water. I’d opt for juices, but they’re just as sugary as soda even though they have vitamins and minerals. The topic is about limiting calories associated with diet soda, so let’s stick to that.

The topic that has garnered the most attention in regards to whether diet soda is bad for you revolves around the chemical compound aspartame. It is much sweeter than sugar, and gives diet soda its flavor without the calories. When it sounds too good to be true, it probably is, right? Well, research has demonstrated that when there is a high consumption of aspartame in animals, over time there is a correlation with the development of different diseases, ranging from brain tumors to memory loss. Of course, there’s two problems with this. First, it requires a high consumption; which means that you need to be a diet soda junkie. If you are, you have bigger fish to fry than worrying about whether diet soda is bad for you or not. There is no reason diet soda should be a staple of your diet, and if you indeed do consume it in high amounts, you should start tapering that habit off. Not necessarily because there is a correlation between aspartame and long term consumption, but because I stick to a very easy and important rule when it comes to the high consumption of liquids: if it’s not water or tea, it’s not meant for me. To add to this, the research has been done on animals. Last I checked, that’s not exactly human-oriented.

So when it comes to the question of whether diet soda is bad for you or not, it’s actually up to you to decide. Like I mentioned, if you’re a diet soda junkie, you need to start lowering the amounts you drink per day/week. Nothing is good for you in high doses all the time, moderation is key. However, if you enjoy a diet soda here and there to satisfy a small craving, I see no problem with it. Diet soda in and of itself is not going to kill you (as far as we know so far), so its not necessary to avoid it like the plague. Nonetheless, that doesn’t mean you should treat it like liquid candy either. Good Luck!