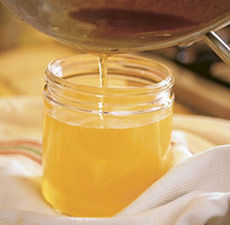 Some people, somewhere out there in the world, are currently drinking butter. Unbelievable, right? We’ve recently been introduced to this concept thanks to Kourtney Kardashian. She was drinking butter, yes, butter on an episode of the Kardashians. Needless to say, most were left scratching their heads. What exactly was she doing? Is this an episode of falling off the deep end or does drinking butter actually have some benefits? After all, when we think of butter, we think of fats.  Yes, that taboo word in today’s fitness media. Ignoring the deeply flawed war against fat that’s been going on over the last decade or so, there’s a sane explanation for Kourtney’s actions.

First, she was not drinking the typical butter that we imagine. We’re not talking grabbing a stick of butter, melting it on a pan, and sipping it like it’s a warm cup of cocoa. That would, indeed, be quite absurd. Instead, the butter involved here is called “Ghee.” Ghee is clarified butter. Clarified butter is butter that is created after butter goes through a process called rendering. Rendering is the process of converting waste into valuable materials. Sounds promising, right? Well, it is in a way. Through rendering, butter undergoes a process by which milk solids and water are separated from the butterfat. If cooked long enough, the water evaporates and the milk solids caramelize (creating that caramel-like flavor). This results in the end product, which seafood lovers might identify as the butter that comes with the steamed seafood they often eat (it has a nutty flavor). Which, coincidentally, might explain why it is drinkable (and the taste acceptable). After going through these changes, much of the protein is removed, removing much of the dairy component. This makes clarified butter (or “Ghee”) acceptable even to those who are lactose intolerant or in any way sensitive to dairy. Now that we’re done with the science, let’s get to the point. Why drink clarified butter?

Clarified butter has been a staple in many diets around the world, particularly in South Asia. It is believed to have a variety of nutritional benefits. First, it may reduce serum cholesterol (the total cholesterol amount in your bloodstream). If anybody has ever received a serum test at a lab, it is a very important component of figuring out the balance between HDL (the good cholesterol) and LDL (the bad cholesterol). There is also some evidence that clarified butter may reduce LDL cholesterol specifically. However, these “beliefs” need to be mitigated by the understanding that these results were seen in rats, not humans. Although there is always some correlation, we are also far apart, so keep that in mind.

Clarified butter also stimulates the secretion of gastric acid, which forms the basis for its second major potential benefit. This secretion of gastric acid aids in digestion, which explains why diets in South Asia often rely on Ghee as an important digestive aid. In fact, it is often the case that babies in India are given a bit of Ghee to suck on to improve digestion, stimulate the assimilation of nutrients, and promote healthy number 2s. Because Ghee contains vital fatty acids, it also helps fuel the development of brain function. This is not out of this world wild, as more than half of the nutrients found in breast milk are in the form of fats. With that said, mixing babies into this takes it to a whole other level. For the potential benefits/drawbacks consult a medical professional. I’m not so sure about this, it is probably best to stick to baby formulas if you’re going to use anything outside of breast milk. But, the point still stands for adults – clarified butter has the potential to aid in digestion.

Before you go on a spree to try this out, keep in mind that clarified butter is still butter. Therefore, it contains a lot of fat. Fats have a lot of calories. The amounts you try should be small, don’t start chugging glasses of this stuff. Furthermore, don’t suddenly start thinking it is so much better for you than regular butter just because it may contain some benefits. Because you’re removing the milk solids and the water, it is actually a more concentrated form of butter (so it has a few more calories relative to regular butter). With that said, it does last longer. Furthermore, some people drink it in the morning because they want to use it as a fuel source (for energy) without ingesting carbohydrates. Fat certainly can be an energy source, but again, butter isn’t exactly the top “fat” choice for this (far from it). Overall, this is certainly an interesting concept, and although foreign to us, quite common in other parts of the world. Drinking butter, who would’ve thought? Well, as discussed here, butter with some qualifiers. But, butter nonetheless. If you’re intrigued, give it a small go, or ask around some more. Good Luck!

1. Melt a couple sticks of butter on a pan over low heat.

3. The butter will separate into three layers: foamy on top, golden in the middle (clarified butter), white liquid on the bottom (the milk solid).

4. Remove the white foamy top with a spoon.

5. Turn off the heat and allow the remaining two layers to cool for several minutes.

6. Pour it slowly through a cheesecloth (or something similar) until you get all the golden liquid out so only the milk solids are left.

7. Use an air-tight container, and store it in the fridge.

Here is a solid Ghee product from Amazon if making it on your own is not an option: